Our philosofy, we train people as well as the dogs. We help people lay the foundation, and give them the tools to continue the job. A well behaved dog is not just a couple of weeks of training, or months, it is a lifestyle.

Here at Dogpalace we use force free training, we have taken the pledge to no use intimidation, force or harm, CPDT-KA certified and a member of the Pet Professional Guild. 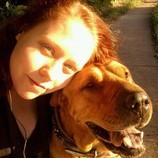 Evelynn has trained dogs for 20 years, close to 9000 dogs under her belt. Originally a dog trainer from Sweden, her late dog was a fully trained protective k9, drug dog at elite level obedience.

Her new dog who is now an amazingly stable individual, previously tried to bite three people when first arriving to the shelter. She has spent most of her years focusing on fear, aggression and other behavioral issues.

Evelynn has also spent a lot of her time with rehabilitating former fighting dogs and junk yard dogs so they can rejoin society on good terms. At the moment she is contracted by Best Friends Animal Society as their NY section rehabilitation trainer, as well as working at Petco being part of their trials for new programs with them

Scooby is a 7 year old pitbull, he almost drowned in Sandy and got out with the other guys in the 11th hour.

Evelynn first met him the day he was dumped at the shelter a couple of weeks before the hurricane, tied up in the middle of the night. It took her 2 hours and 10 hot dogs to convince the drooling, cowering, growling mess of a dog hiding in the corner of the cage to come out.

He showed up to have a great skills with dogs, but wasn't too fond of strangers, he had been crated so much that he had problems jumping, and just doing a regular sit. He shyed away from hands, cowering, expecting to be hit. So after Sandy hit she took him in as a foster dog to try him out, and he never left.

Now a couple of years later he's still amazing with other dogs, and great with people. He has taken AKC novice level trick dog, and AKC intermediate trick dog.